The 3rd instalment of our “Inspire to Make” series sees the ambitions of 2 individuals – from completely different cultures – use their shared passions to create the best ski movie they possibly could, and in the process something uniquely inspiring.

Canadian Melon rider Kieran Nikula teamed up with Hong Kong-based Eddie Foster (and his film-making company 2Deep Media) to release “Frames”: an instant classic, journeying through the endless vast mountain ranges of British Columbia. Showcasing epic alpine cinematography and shredding, Frames is a must watch for anyone who not only appreciates the mountains, but loves tearing down them. Check out the full film above and find out how Kieran and Eddie made it all happen below…

The movie is fantastic! Tell us how it came to fruition?

Keiran : Thank you! Eddie (the creator of the film) flew over from Hong Kong pretty late in the season. We began shooting right away without a clear plan. We knew we wanted to tell a story and we wanted to try to tell a unique story. We bounced around a lot of ideas for days and we just honed in on what Eddie was doing and is capable of. I think we find each other really interesting as we come from two distinctly different lifestyles. It was cool to pull the perspective of the film back behind the film-maker and explore the backcountry through his perspective.

“WORKING AS A 2 MAN TEAM WAS TOUGH WITH THE VISION WE HAD FOR THIS PROJECT.”

Eddie, this was your first time exploring the region of British Columbia? How did you find shooting here?

Eddie : Yes, this was my first season exploring British Columbia and it was such an amazing experience. I have been skiing at Sun Peaks for 16 Years now and haven’t really seen much else of B.C. so this season for me was huge. Shooting in the vast mountain ranges of B.C. was incredible, Kieran and I travelled to some amazing locations. Shooting in that type of environment came so natural to me, I felt like everything I captured was so beautiful the way it was (Raw) that it almost became so easy to film. I didn’t have to try so hard to capture the perfect shot as everything was framed just how I had imagined.

The landscapes portrayed in the film are incredible. How much of an impact did this have into shaping the style of the movie?

Eddie : The Landscapes that Kieran and I explored throughout the season were mind blowing. Coming from Hong Kong, such a condensed and claustrophobic city, to being out in these vast landscapes had an enormous impact on the film and really helped me shape my story. After visiting a few amazing locations, especially in Blue River and Clear Water, it became clear to me that in order to really emphasise my narrative I needed to focus heavily on the visual story telling and let my shots describe my perception of British Columbia.

What were the biggest challenges in shooting this type of movie?

Kieran : For a large portion of the film it was just Eddie and I. Working as a 2 man team was tough with the vision we had for the project. I worked full time so we had 3 days a week to be out shooting. That put huge pressure on us to work really hard and Eddie was forced to push his return flights back a couple of times!

Eddie : I think the Biggest challenges that we faced whilst shooting this film was avoiding the cliché. We wanted to create a narrative that was unique and used unconventional methods without coming across as too contemporary. We felt that this film needed to take a different approach and focus on me rather than Kieran which became very challenging as I found my story too confusing (English background, born in Hong Kong, boarding school in Australia). However, Kieran was absolutely fascinated by it and thought it would be such an interesting concept to explore; contrasting our lives and contextual surroundings. The challenge that came next was how to contrast our lives, how do we present to our audience these contrasting places through visual mediums.

How important is your equipment when you are out in the backcountry?

Kieran : Equipment is the most important thing next to ambition we had for the project. Ski gear, camera gear, trucks, sleds, etc. were all crucial, and it was vital we had the best. Good goggles that cause no fogging problems are hugely important, and I was blown away by the Melon Dark Smoke lens. Completely blacked out but I had no problem using it in any condition, their versatility was vital to us filming in winter, spring and early summer conditions.

What is your favourite shot from the movie?

Eddie : I have a number of favourites from the movie but I think the double backflip would be number one.

Kieran : I think the hand rag clip may be my favourite!

“WE WANT TO CONTINUE TO TELL STORIES AND WE WANT TO CREATE SKI FILMS THAT ARE OUTSIDE OF THE TYPICAL SCHEMA.”

What are the key things you wanted the viewer to take from the movie?

Kieran : While deciding on the idea behind the film we kept coming back to how different our two lives are. That is just due to our natural environment, as Eddie comes from the city and I come from the mountains. We wanted to try to get people thinking about the differences in our cultures and how the coming together of these two cultures would create something unique.

Eddie : The most essential thing that we wanted our viewers to take from this movie was the focus on how two completely different individuals can share the same appreciation and feelings towards their contextual surroundings, especially when born and raised in completely different contexts.

Eddie : We got some pretty sweet plans coming for next season!

Kieran : Big things. We are working on a few ideas for this coming winter, Eddie will be back over to Canada in the fall and from then it’s go time.  We have both been working really hard to get ourselves lined up for the winter and we plan to work on a few different projects. We can’t give out to any details just yet but we are excited about what we have coming together.  We want to continue to tell stories and we want to create ski films that are outside of the typical schema. 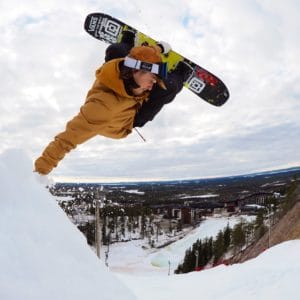